‘Logging scars’ show impact of deforestation in Canada is worse than we know, research finds

Roads, pits and other ‘logging scars’ have caused underreported environmental damage to forests, with hidden costs for Canada’s carbon footprint, according to researchers who scoured the landscape to see the impact from above
Ivan Semeniuk Science Reporter
Published December 3, 2019 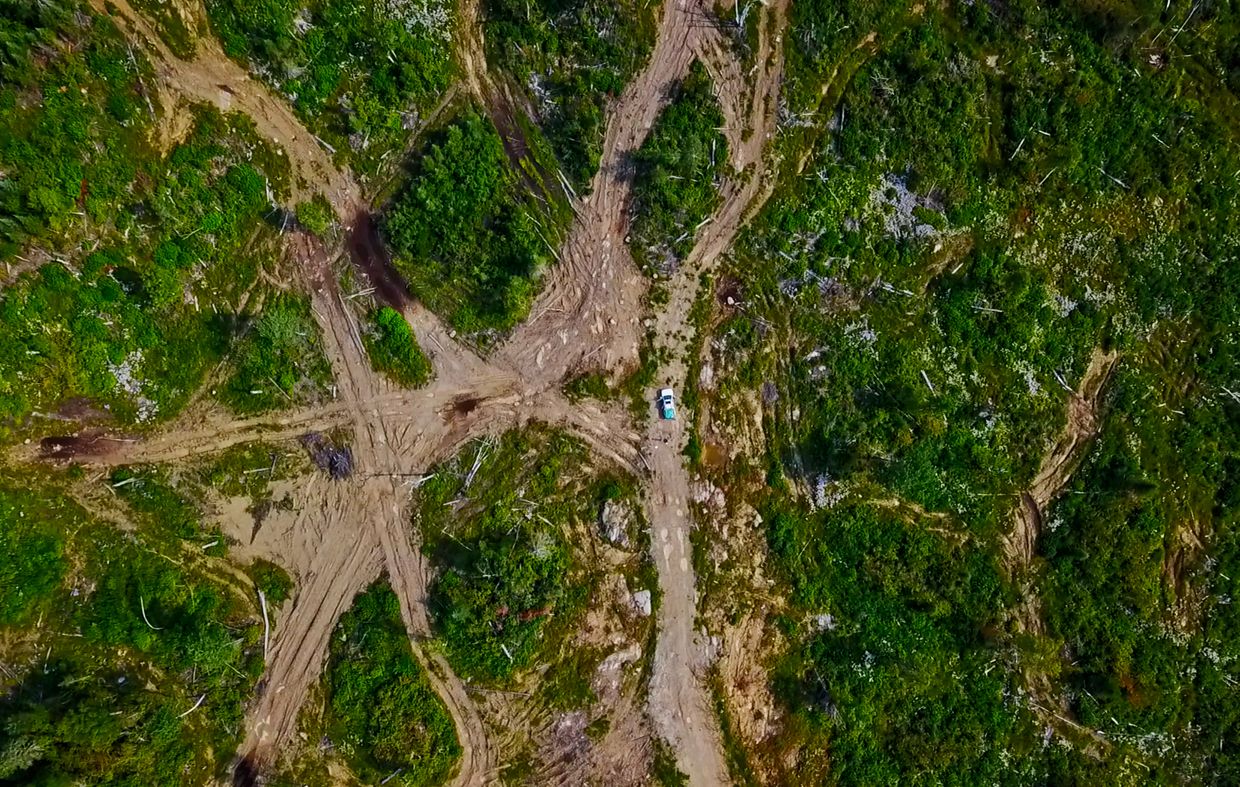 A drone image shows roads and other impacts from heavy forestry equipment crisscrossing the landscape of Northern Ontario.

After years of flying across northwestern Ontario on projects related to forest conservation, Trevor Hesselink has come to know certain features well. They consist of long lines and bare patches that thread their way through the bush for kilometres. Largely invisible from the ground, they form a widespread and persistent network of scars that reveal a little-known side effect of forestry practices.

“When you drive around up north and see all the trees whipping past you endlessly, you don’t really have a good idea of what’s going on,” said Mr. Hesselink, who is director of policy and research for the Wildlands League, a Toronto-based environmental not-for-profit.

Those scars are the abandoned infrastructure – logging roads and other work sites – that remain treeless long after the work crews pack up and growth returns in the surrounding harvested area.

In a newly released report, Mr. Hesselink has taken a big-picture look at the nature and impact of all those logging scars that can be seen from the air and arrived at a startling conclusion.

Based on data gathered across a large study area north of Thunder Bay, he estimates that treeless patches and scars account for 10.2 per cent to 23.7 per cent of the area of forests that have grown back after logging. And because these scars persist for decades, they amount to a net rate of deforestation (long-term removal of trees) that has largely been overlooked in Ontario and elsewhere across Canada where industry practices are similar. “The big finding here is that these impacts are currently going under the radar,” Mr. Hesselink said.

That means logging scars are not fully taken into account when the provincial and federal governments tally up forest area. Nor are they factored in to calculations of how much carbon Canada’s boreal forest is storing, which Ottawa uses for international reporting on its climate commitments.

The Ontario government, which has weakened regulatory requirements in other industries, is expected to unveil its new strategy for the province’s forestry sector on Wednesday, and conservationists fear the situation will get worse. 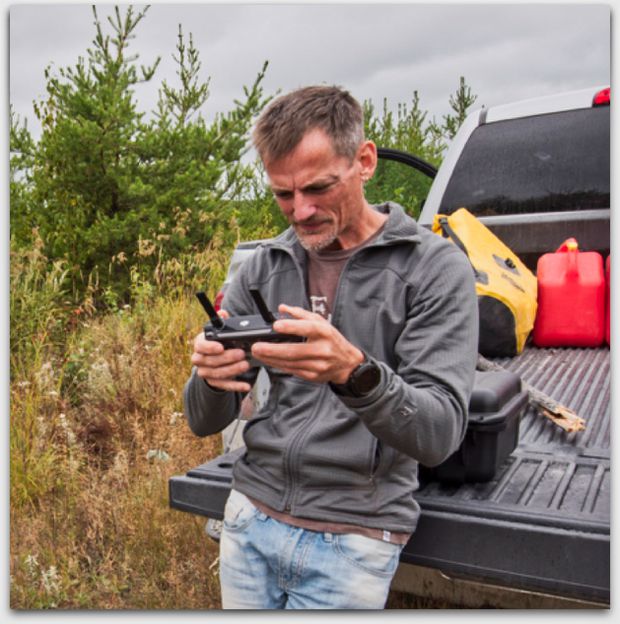 Trevor Hesselink is the director of policy and research for the Wildlands League.

Most of the wood harvested in Ontario today is still from old-growth forests that are being logged for the first time. The practice is considered sustainable based on the premise that the forests eventually grow back. This notion is also central to Canada’s climate strategy, because the carbon-rich boreal landscape plays a key role in offsetting a portion of the greenhouse gasses that are released through industrial and domestic use. It is also crucial for the conservation of threatened species, including woodland caribou that depend on dense, intact forests.

What is missing from this picture, Mr. Hesselink said, is an appreciation for how much, and for how long, tree growth is inhibited in places where heavy machinery has compressed the soil, or where the ground is inundated with waste wood from industrial-scale logging.

This is primarily conducted as “full tree harvesting,” in which a tree is severed at the base and dragged to a roadside landing area where limbs and tops are removed and often left behind. The soil under the temporary roadways that enable this practice is compacted to something approaching the hardness of asphalt. Seedlings have difficulty finding purchase along these routes, unlike in the surrounding clear-cut areas. The rectangular landings, which are similarly disturbed and can be choked with debris, also suppress tree growth, even after 30 years. 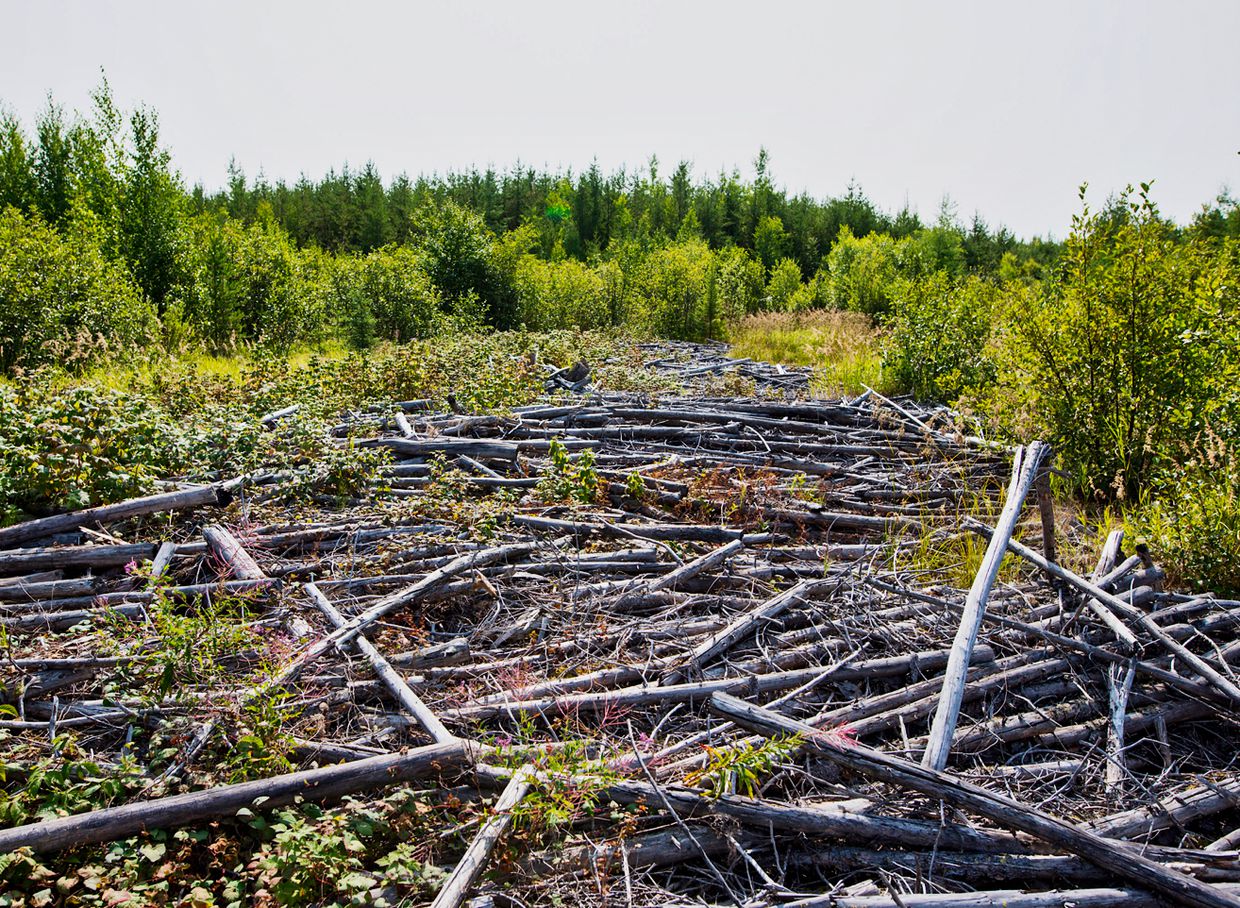 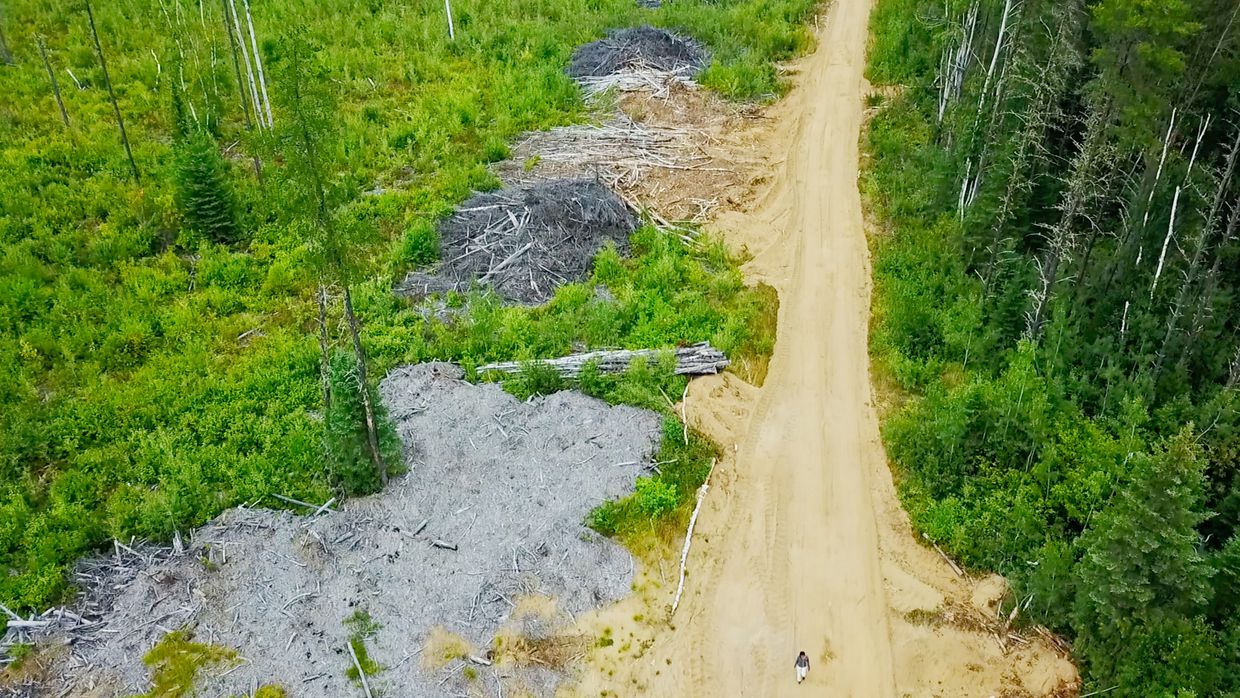 Here, tree waste is shown on one side of a former logging road, with old-growth forest on the other. Trevor Hesselink/Handout

Together, a swath of roadway and adjacent landing area can measure 30 metres. This is narrow enough to be missed when large-scale remote-sensing surveys are used to measure the forest, but big enough to account for an estimated 21,700 hectares of deforested landscape in Ontario each year, the report found. This figure for Ontario alone is seven times greater than the reported rate of deforestation for all provinces combined, Mr. Hesselink said. By 2030, it will amount to 41 megatonnes of carbon dioxide uptake loss – roughly equivalent to the total emissions for all passenger vehicles in Canada for one year.

“The idea that we’re not successfully regenerating trees on such large areas … I think would be disturbing to virtually anyone,” said Jay Malcolm, a biologist and forestry professor at the University of Toronto, who was not involved in the report.

The findings are particularly troubling because much of Canada’s old-growth forest continues to be harvested for single-use, throw-away products such as tissues, or for pulp – products for which alternative sources exist. And while researchers and industry know about logging scars, no attempt has been made to rigorously quantify their impact until now.

Anthony Swift, a project director with the U.S.-based Natural Resources Defense Council, said the report has global implications because Canada’s boreal forest is considered the largest intact forest on Earth, with an amount of stored carbon that nearly doubles that in all the world’s known oil reserves. He said the report’s findings are another reason forestry should be further restricted. “As we face the need for urgent climate action, it is critical that we ensure that carbon stays where it is and isn’t released into the atmosphere,” he said.

Dr. Malcolm added that forest scars could have even more troubling effects, because in addition to reducing stored carbon, preliminary studies suggest the decaying debris at landing sites is also a source of methane, another potent greenhouse gas. In a natural forest, regrowing vegetation would likely use the decaying material. He said the answer is straightforward: Regulators must keep a closer eye on forests long after logging occurs and require the industry to adjust its practices and minimize scars.

Mr. Hesselink added that some other approaches to logging leave unwanted material where the tree is harvested, which could improve the situation. However, more work is needed to determine which practices are best for optimizing forest regrowth. “Alternatives also have their downsides and the questions are complex,” he said, “But we need to reconsider how we do things in a transparent and public way.”

In depth: Anatomy of a ‘logging scar’

A typical scar may consist of a former roadway plus a roadside landing site where timber was processed and waste wood discarded. Because of compacted soil and piled debris these wide swaths appear to be less capable of regenerating forest relative to the surrounding logged areas. Collectively, they reduce the amount of forest available for species conservation and carbon storage to a degree that has not been rigorously documented by industry and governments. 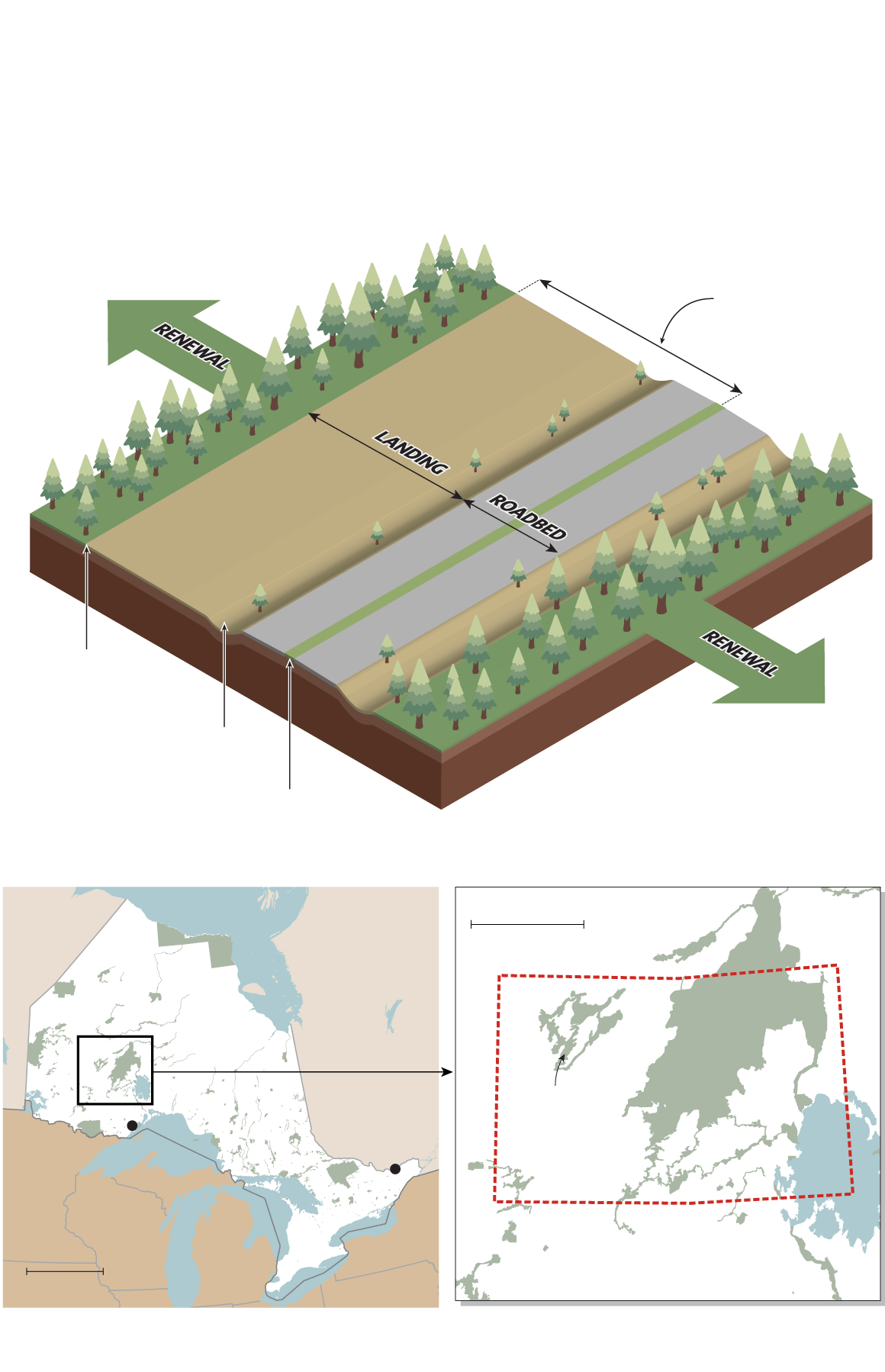 One thought on “‘Logging scars’”