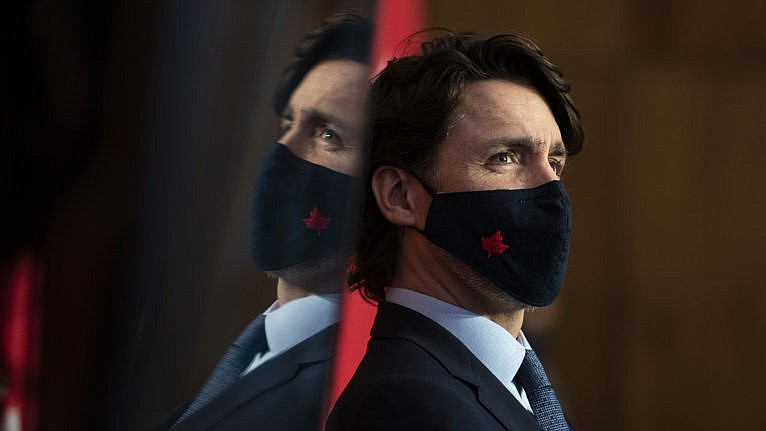 Paul Wells: On every subject before the party at its national convention the debate is over. All that is left is agreement. And no choice among priorities is ever necessary. 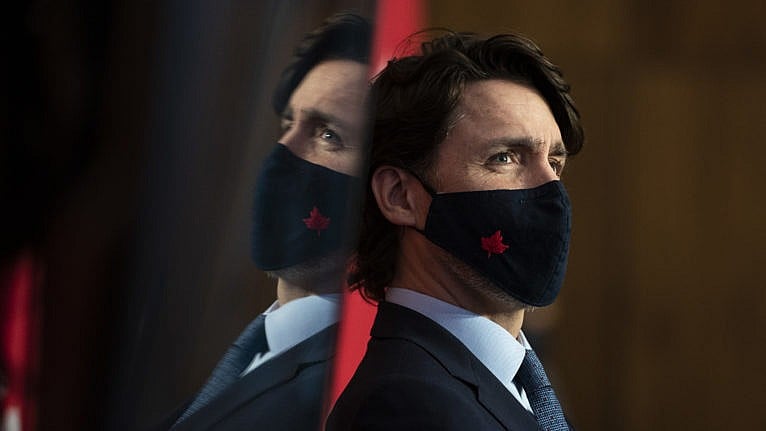 Trudeau participates in a news conference in Ottawa on March 12, 2021 (CP/Justin Tang)

All happy families resemble one another, Leo Tolstoy wrote, but each unhappy family is unhappy in its own way. Canada’s federal Liberals, gathered in virtual convention on one another’s laptop screens all weekend, went Tolstoy one better: this family is so happy that all its members are essentially the same person.

“You know, Ken, I could not agree with you more about what you just said,” Chrystia Freeland told Ken Dryden.

In a few minutes of—well, the word in every news article before the convention and most of the online commentary while it was happening was “debate,” except there was almost never a debate; and I don’t merely mean this in the sense that the discussion was too genteel to deserve the term “debate,” I mean that the convention rules required that 50 Liberal members express a desire for a debate on a given motion before one would take place, and there were almost never 50 members calling for a debate, so there was rarely a discussion of any kind on any proposal before the convention—anyway, in a few minutes of roaming consensus, the convention passed, by large majorities, resolutions calling for a universal basic income; national standards in long-term care, enforced by random federal inspections of care homes; and a national high speed rail network.

Perhaps you think a government can only do one of these. Perhaps you’ve noticed that this government has not yet done any of them. That must be because you are not a Liberal, because Liberals want to do everything. In fact they are quite sure they are currently in the process of doing everything. And if 50 of them can never be found in favour of debate, it’s because, on every subject, the debate is over. All that is left is agreement.

Times have been tough, this aggregate Liberal agrees (because the ur-Liberal agrees with itself on everything). People have suffered. Justice is too long coming. But at least Canadians have a government that is on their side. It is good and true. This government is vexed by foes who don’t get it, but those foes will not win, because they must not win. On this, Liberals agree.

“We Liberals know that a government must work for everyone,” Trudeau said in his closing speech. “For every parent, for every worker, all the small businesses, all the youth, all the elderly.”

Great. Who comes first? Whose interests prevail? If a small business is unfair to the youth it employs, say, or the needs of the elderly should, just hypothetically, need to be financed by the worker—who makes the hard calls? Based on which principles or data? These would be interesting questions to debate at a national convention of a political party that has governed for half a decade and, who are we kidding, may yet govern for another half. But the rules say you need 50 Liberals for a debate, and I’m sorry, there just aren’t 50 Liberals. There’s one. And his beard looks great.

There’s an old line, “To govern is to choose,” which a quick search suggests has been variously attributed to Pierre Mendès France, Nigel Lawson and John Kennedy. I have no idea who those guys were, but I can tell you they sure weren’t any kind of Liberal.

There were, of course, occasional blanket admissions of imperfection. On the specifics, not so much. “In 2019, we promised even stronger gun control,” Trudeau said. “And last year, we banned assault weapons.” Of course no leader at any party convention would acknowledge mixed reviews. In this particular case, though, the omission was particularly brazen. The group PolyRemembers, which represents survivors and victims’ families of the 1989 mass murder at Montreal’s Ecole Polytechnique, endorsed Trudeau’s 2019 promise. But the same group has lately written Trudeau revoking his invitation to their annual Dec. 6 memorial, because his bill “changes nothing.”

The whole weekend floated on a similar plane of absent context and proportion. Freeland made headlines for perceiving a “window of opportunity” and indeed, perhaps an “epiphany,” in favour of state-provided childcare. Sure, there had been calls for such a thing when she was only 2 years old, she told Dryden, who tried to implement such a program before Paul Martin’s government fell to Stephen Harper’s Conservatives in 2006. Harper preferred to send cheques to parents instead of opening daycares, Freeland said. And it’s so. She didn’t mention that Trudeau preferred to send bigger cheques after 2015, rather than opening daycares. This is a defensible choice! But the whole notion of governments choosing among competing good ideas was on vacation, so not a word.

Freeland did wonder aloud about the tension between immediate results and the long-term planning that’s often necessary for big change. “There can be this anxiety in politics that if you don’t deliver immediately, if you don’t show results tomorrow, it will be hard to maintain the support of Canadians,” she said. “It will be hard to keep them patient and with you.” She asked Dryden for his thoughts on “the tradeoff between delivering tomorrow and building a system. Because building a system, Ken, it takes time!”

I found Freeland’s whole gambit a bit confusing, because the Trudeau government has been building a childcare system, or at least periodically claiming to, since before it was elected. Action on child care was a 2015 campaign commitment. The 2016 and 2017 budgets set aside $7.5 billion over 11 years for early learning and childcare. This government proclaimed a “historic” agreement with provinces and territories on childcare in 2017. It named an expert panel on the subject in 2019. What has become of that work? Not only did the minister of finance not update anyone on it, she didn’t mention any of it.

“Trust Canadians,” Freeland said she is frequently told by the Prime Minister. “They are smart.”

Did O’Regan, the minister with line responsibility for the Keystone XL pipeline, have thoughts on how to respond to its demise? Did François-Philippe Champagne, who is on his fourth cabinet job, have ideas for tweaking the $950 million Innovation Supercluster fund, which may be underfunded if indeed it has any utility? If a Liberal government were to send inspectors into long-term care homes, which are a matter of provincial jurisdiction, is there any office in Ottawa that even contains the address of those homes? Is there any cognitive dissonance about the notion of enforcing federal standards on provinces where many of the same Liberal staffers enforced provincial standards, or should have, in their previous jobs working for provincial governments for a decade and more?

Of course it’s naive to even pretend a political convention would ever be treated as the right place to discuss choices and priorities. They’re marketing exercises, and the Liberals’ ran more smoothly than the New Democrats and without the members delivering a direct rebuke to the leader the way climate change-denying Conservatives did to Erin O’Toole. To the extent an election is a binary choice—keep or replace the incumbents—the Liberals have reason to be optimistic that the choice, in an election that could come soon, will favour them.

And I should also say that, on a weekend that mostly amounted to a succession of Zoom panel discussions, it was easy to be reminded of how thoughtful many members of this government can be. Maybe some day David Lametti will be an effective justice minister, perhaps in some other government. Jonathan Wilkinson is more interesting to hear on environmental policy than many of his colleagues who enjoy proclaiming their love for the planet. I don’t doubt the heart of this crew, or the brains of many.

But I never cease to be amazed by the weightlessness of Trudeau Liberalism. After a year that has often seemed to come quite literally from Hell, when every parent, worker, small business, youth and elderly Canadian had to make grinding choices several times a week, I’m not sure it’s entirely encouraging to behold a government for which every need is imperative, no cost exists, and no choice among priorities is ever necessary. There is, somewhere in it, the jarring sound of unchecked privilege. One day, perhaps not soon, this happy family will wonder what on Earth it was thinking on a bright spring weekend in 2021.

This is so right on the money! I endured a lack of fitness for some years but then gradually turned it around and now reap some of the benefits. It does take time and commitment but well worth it.

Fitness is freedom.  I wonder how many of us have ever considered this sage bit of philosophizing.  I hadn’t.  As I whizzed down an aisle in our local supermarket a week or so ago, following the COVID arrows in the right direction in order to get to my intended target of the far end of the next aisle, I happened to glance over at the magazine section in passing and was stopped by this splash on one of the covers.

It caught my eye despite my focus on getting to my next item.  As a senior, I can’t tell you how strongly this phrase resonated with me.  We learn to accept increasing numbers of physical limitations, and we try to focus on the things we can do rather than the things we can no longer do.  BUT, and this is an important “but”, being (relatively) fit really does allow you…

Thanks for your thoughts on this.

This phrase is so common in the world of fitness and sports, when one is asked to establish the mind body connection to activate muscles or to fire the brain into activating some muscles in a specific exercise. Anyone who works out is familiar to this idea. However, the mind body connection or relationship is not new in philosophy; it is actually a very old dilemma that is found also in religions. Therefore what is the mind and what is the body? Is the mind inside the body or vice-versa? Are we made of both or are these two the same dimension? In this dialectic dissertation, two potential answers are found: dualism and monism. For the depth and complexity of this subject, the study will be developed through multiple posts.

Before digging into dualism and monism, the everlasting starting point of any analysis must…

The thoughts of the US, China & Russia squabbling over the borders on our Northern coasts is truly terrifying. Even more terrifying will be the coming consequences of warming. And if we doubt this just take a look at the weather in Labrador this winter, absolutely stunning! I am truly worried for my grandkids future.

As most of you know, the Northwest Passage has been in the sights of explorers and traders for literally centuries.  The dream has always been to find a shorter route from Europe to Asia than going all the way around Africa or all the way around South America.  Even today, with the Suez Canal (ouch) and the Panama Canal cutting off thousands of miles, being able to take cargo ships and freighters between Asian and European markets over a northern route would save considerable time and money if only it were a real possibility.

Thanks to man-made climate change, the loss of permanent sea ice is having a devastating impact on the people and animals that have lived in the Arctic for millennia.  Absolutely devastating. But, those same people whose zest for commercial enterprises helped bring us global warming are increasingly seeing that the dream of a  navigable Northwest Passage…